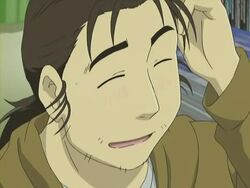 Souichirou Tanaka is an artist who focuses on designing costumes for cosplay, and thus has a strong connection with Kanako Ohno, whom he is later with in a relationship. Souichirou also has a strong focus on plamo, or plastic models.

Tanaka has long brown hair tied to a ponytail, with short bangs. Tanaka's face is usually stubbled here and there. Like typical otaku, he generally wears baggy hoodies and cargo shorts. He generally has a relaxed expression on his face, but it can change quickly when he's angry.

Tanaka is an easy going and pleasant person in Genshiken. He usually stays out of arguments and keeps a cool head. He is a meticulous person, and this trait has translated well into his preferred hobbies, which is sewing costumes and putting together model figurines. Tanaka's skill as a seamstress is so great, he can eye a body in a bikini and get close to the exact measurements.

Tanaka's temper is rarely seen, but he becomes incensed when people show disregard for his figurines. Also, once he's in a relationship with Ohno, he occasionally has streaks of jealousy.

Tanaka started out as just one of the guys in the Genshiken club. Later on, as Ohno joins the club and professes her love for cosplay, the two quickly become partners in crime.

During the campus cosplay contest, Ohno is taken out due to her illness as a result of Saki accidentally throwing a bucket of questionable water on her. As repentance for making Ohno sick (as well as causing a fire and getting the club in trouble), Saki is condemned to enter the cosplay contest. She replies that there's no way a costume could be made for her that quickly, but previously at the beach, Tanaka got an idea of her measurements from seeing her in a bikini and already had clothes standing by with her fitting. After being cornered by her own boyfriend, Saki reluctantly agrees.