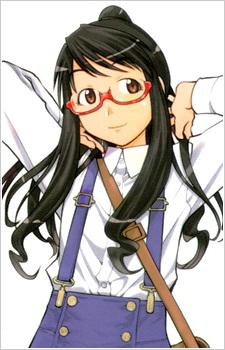 Rika Yoshitake is one of four new Genshiken members, making her first appearance in Genshiken Nidaime. Yoshitake joined on her first year after seeing Chika Ogiue's poster drawing demonstration. Like Ogiue and the rest of the new generation of Genshiken, she is a fujoshi ("rotten girl," a nickname for girls into yaoi manga). She is best friends with Mirei Yajima, and the two are often seen together. Rika also has a younger sister named Risa Yoshitake, and they both share similar interests.

Yoshitake has long black hair that is usually worn with a ponytail. On certain occasions, her hair is stylized with wavy tips. She wears red colored half-moon spectacled glasses. Despite being an otaku at heart, Rika has an eye for clothes and dresses fashionably. She states her reason for doing so is not to attract men, but to impress other women.

In contrast to many otaku, Yoshitake is lively and gregarious. She is also unashamed of her love for BL (boys love, aka yaoi) and will have open conversations about her hobbies. Her outgoing and strong-willed personality also allows her to convince people to do what they would otherwise not be willing to do.

Yoshitake is a diabolically mischievous person. She is very inquisitive and is no stranger to gossip. These traits are usually the catalyst for her meddlesome behavior among Genshiken members. Yajima often reprimands Yoshitake when she crosses that line.