Manabu Kuchiki ("Kuchi" for short, which he prefers to be addressed as) is a loud and annoying, but ultimately good-hearted and helpful member of Genshiken. Because of his abrasive behavior, he is often disliked and ostracized by the rest of the club, especially by the girls. He is the expansive cute-fixation otaku, which means he adores anything he finds cute and charming. As such, he often calls other members with the "-chan" suffix. His movements and behavior copy those of much popular anime, and most of the time he speaks imitating the voices of anime characters.

Kuchiki is tall with a short haircut and a long, oblong-shaped face. He is often speaking with pursed lips, and does many awkward poses. He is a big fan of cosplay, including cross-dressing. 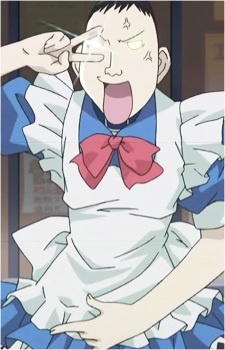 Despite his seemingly insufferable behavior, he will often use it to his advantage to either assist or please the other members of Genshiken. For example, when Hato's true identity was about to be discovered, he willingly put himself in harm's way to distract people from the situation. Kuchiki "attacked" Hato and allowed himself to get choked out - to his pleasure, surprisingly.

True to his name ("kuchi" is Japanese for "lips"), Kuchiki is unafraid to plant a big kiss on any member of Genshiken, female OR male.