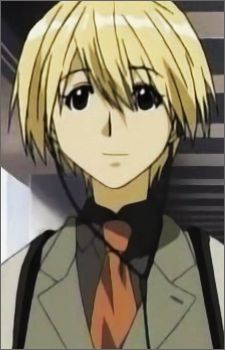 Kousaka is currently dating Saki Kasukabe (Kousaka's childhood friend). Even though Kousaka seems aloof and Saki doesn't share his interests, he does care about very much. He is also the initial reason Keiko Sasahara frequents the Genshiken room due to her being infatuated with him.

Kousaka is a bishounen (a pretty boy) with blonde hair, likely dyed. He used to be bald during grade school - a trait that Saki Kasukabe initially teased him for - but it has since grown it to mid length. His outwardly good looks tends to enamor girls even in spite of his otaku lifestyle. According to the fujoshis (rotten girls) in Genshiken Nidaime, he has a hairless body and hourglass figure, and can henceforth cosplay as traps with absolute ease. Unlike Saki, Kousaka is more than happy to cosplay and often does so to assist Genshiken in selling merchandise.

Kousaka is a genuinely happy and friendly individual with a near constant grin or smile on his face. Unlike most other otaku, he is quite happy with himself and is very open about his hobbies. He is always excited to meet people with similar interests.

Although Kousaka loves Saki Kasukabe (Kousaka's girlfriend), he does seemingly tend to prioritize his hobbies first. It is alluded by Saki that even during sex, Kousaka will position himself accordingly in order to watch the TV when his favorite show comes on. Nevertheless, they are still together, and Saki's tolerance towards otaku improves as a result.

Kousaka is an avid gamer, and can stay focused on an intense gaming session for hours. He plays fighting and puzzle games at an elite level and can generally dominate anyone that plays against him. During Comifest, he is often seen in video game tournaments and generally wins.