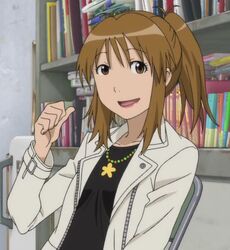 Keiko Sasahara (also known by her work alias "Kyouko") is the younger sister of Kanji Sasahara. Unlike her brother, she is far from an otaku and lives a more socialite, trendy lifestyle influenced by her teenage friends. She starts off openly antagonizing her brother and avoiding his otaku lifestyle, until seeing a pretty boy otaku like Kousaka influenced her to become an unofficial member of Genshiken, despite not being a college student yet.

Because of how unusual Madarame's name is, Keiko typically addresses him as "Watanabe." This annoys Madarame for the time being, but he lets it slide seeing as how the name stuck with her.

Keiko also has quite a competitive spirit. Once she realizes Saki's weakness (she abstains from joining in on Kousaka's otaku conversations), she willfully watches hardcore anime series in an attempt to have more to relate to with Kousaka. Also, when Madarame is actually popular with girls, she puts herself up as a possible love candidate seemingly because her pride won't allow the other girls to win over her.

Keiko is first mentioned when calling her brother Kanji for some money. The other Genshiken members slightly fantasize about her being the doting moe imouto ("adorable sister") archetype, but they couldn't be further from the truth. Keiko arrived in faddish clothes, heavy make-up, and stylized hair and nails. Her detestable attitude towards Kanji even sparked Saki to act as his girlfriend. Unfortunately this is short lived as Kanji denies involvement. Moments after, Kousaka arrived after shopping in Akihabara, to which Kanji reports that this is Saki's real boyfriend. Keiko was instantly enamored with Kousaka, and was interested to see what he bought. Kousaka revealed a giant 6ft scroll of an anime character. Keiko pauses briefly in shock, then feigns interest in the scroll. The other Genshiken members, observing the scenario from a distance, laugh hysterically at her expense.

Keiko stumbles upon Madarame in the Genshiken room, which startles him (he briefly visualized her as Kasukabe). She then teases Madarame on sticking around campus because he wants to cross paths with Kasukabe again. Madarame vehemently denies this, which angers Keiko. She harasses Madarame up until they were interrupted at the door by Sue. As she leaves, she tells Madarame he's afraid of getting openly rejected and should face heartbreak sometime, even if he is an otaku.