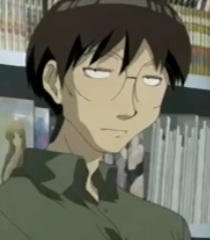 Madarame is described as tall with broad shoulders, but his body type is quite frail looking, likely due to his poor diet as a result of overspending on merchandise. This is confirmed when he breaks his bones - typically his distal radial bone in his forearm - multiple times. He has slight mid length black hair (or dark brown in the anime). He has shallow eyes and also has trademark prominent fangs usually sticking out of his mouth.

One of Madarame's personal faults is that he's untrue to himself when it comes to matters of romance. When confronted with the topic, he immediately denies it, even though it's almost clear as day to everyone else. There are times when he will feel overwhelmed to the point of getting flighty. Throughout the series, his personal growth has become the focus of certain story arcs.

In the anime, the story delves quite deeper into Madarame's past. In high school, he made an insensitive remark about why a girl was feeling so withdrawn in class. This remark made one of the girls he liked slap him for his perceived rudeness, and the following year he was the only boy in class to not receive any chocolates on Valentine's Day. This moment has a profound effect on Madarame's interactions with women and explains why he's so awkward around them, specifically the ones he likes.

Madarame is one of the first Genshiken members introduced upon Sasahara's arrival, along with Tanaka and Kugiyama. Although he acts like he's in charge, he doesn't really follow up with his statements and therefore nothing really gets done.

At Comifest, Madarame slipped and broke a bone in his forearm ("distal radial bone fracture"), causing his hand to swell up. As it swells up even more, Sasahara and the others are concerned about his well being, but Madarame is still adamant on buying all the doujinshi he's been craving for. Suddenly, a pedestrian accidentally bumps into Madarame's swollen hand, and he collapses from shock. As he's getting pulled out by a stretcher, he tells everyone to continue shopping without him, and he'll reimburse them for buying his favorite doujinshi.

Madarame and Saki Kasukabe's tend to bicker quite a lot, and Madarame tends to be on the receiving end of her physical aggression. In spite of that, due to the "nose hair incident," Saki's cosplay at the school festival, and some of the quality moments they've had together, he gradually falls in love with her in secret. Madarame never has the courage to confess his feelings during the 3 years because he is sure that his feelings have no chance of getting reciprocated. By the end of the first generation, Madarame and Saki have become good friends.